Steeler Fever and the Super Bowl

Jerusalem – It doesn’t matter how old I get it, how far I travel from Pittsburgh, or how much responsibility they give me when I get there. I can’t picture a fall Sunday without the Steelers or imagine a Monday morning that doesn’t involve the Pittsburgh Post Gazette sports section.

I live seven hours ahead of Pittsburgh and watched 13 games this year. I missed two others because I was on international flights. The blessing of having a good team and cable TV is that with ESPN, FOX sports, and Middle East TV--a Christian satellite channel--I’m almost guaranteed Steeler coverage every week. There have been a lot of late games this year, with 4:15 games starting at 11:15 here and usually going to 3AM. For our Sunday night and Monday night games, I set my alarm for 3:30 or 4 and then go straight to work after the game ends. As David Puddy said, clad in Devil face paint “You gotta support the team.”

The playoff schedule has been tough so far – an 11:45 pm start time for the Chargers and 1:30 AM for the Ravens. I took a nap before both games, drank some coffee, and then jumped on the sofa throughout each game, panning for luck, screaming at the TV, and waiving one of our Terrible Towels (we have like six of them). When Troy Polamalu scored in the fourth quarter against the Ravens, my screams of joy woke up half of the apartment complex.

Post-victory euphoria has carried me through some bedraggled Monday mornings these last few months. My Monday ritual starts with reading the Post Gazette’s coverage front to back. I then hit ESPN.com to check whether they’ve given the Steelers sufficient credit for their greatness. With certain exceptions (Merrill Hoge), the praise there could be more effusive for the Black and Gold. The Sports Guy has been a hater most of the year – probably because the Steelers win late and close and don’t usually cover the spread. My Steeler sickness reaches beyond the sports pages though and into the world of semi-talk radio. I say “semi” because they talk and I listen to pre-recorded podcasts.

I spend a lot of time commuting. During the campaign, I must have listened to every Fresh Air, Talk of the Nation, and Political Gabfest recorded. The euphoria of the election left me ODed on politics, though, and I’ve traded Jim Lehrer for Tony Kornheiser. PTI with Kornheiser and Michael Wilbon is great – they’re funny, outrageous, and sufficiently appreciative of the Steelers. There is no excuse though for the time I spend listening to ESPN’s Football Today, a show filled with puddle-deep analysis and minutiae scraped from Bob Costas’ editing room floor. Still, they might say something about the Stillers, so I tune in for as much as I can bear.

Every Monday, I try to squeeze the Steelers into my work meetings. That might be ok if I worked in the Athlete’s Foot at Monroeville Mall. But I work in the West Bank, with Palestinians, in villages. No one has ever asked me about why Jerome Bettis was nicknamed “the Bus” or when the lob to Weegie Thompson ever actually worked. Usually, the best I can do on this front is when I’m asked where I’m from; I always answer (in Arabic) “Pittsburgh -- we have the best American football team in the country, the Steelers.” People nod sagely, sometimes confused. Other times they smile at the mention of football. Palestinians love soccer. 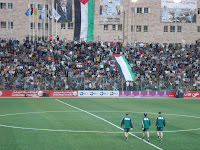 Several months ago, I went to the first ever Palestinian-hosted national game. It was at the newly minted Faisal Husseini Field just outside of Jerusalem in Ar-Ram. The roofs of the buildings surrounding the packed stadium were crammed with cheering fans. FIFA officiated the game, stamping it with international legitimacy. As the refs took the field, a Palestinian friend turned to me with tears in his eyes, and said, “FIFA… I can’t believe FIFA is here!” Palestine tied Jordan 1-1; but there couldn’t have been more enthusiasm in the air had the team qualified for the World Cup. National aspirations and soccer – combined together it was a moment of sheer joy. 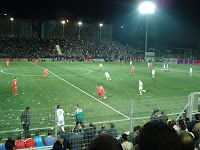 Is that what it is for me and the Steelers? I love being from Pittsburgh, but it is more than Pittsburgh pride that has me bouncing off the walls in the wee hours of Monday morning. The Steelers do it right. They don’t show up the other team with antics. They aren’t flashy. They are tough and determined and their team effort is beautiful. In years past, we won with defense and a bruising running game. This year, our defense is again legend-worthy, but our team has a clutch toughness. We own the big-play and gut games out in the midnight hour.

In the 70s, the Cowboys were dubbed “America’s Team.”

The Cowboys haven’t won a playoff game in years and now have a reality TV show.

There is something very American about turning ordinary dreams into extraordinary greatness. That’s the Steelers, Pittsburgh, and the Steeler Nation -- that’s how we see ourselves or at least how we’d like for it to be.

Around 1AM on Monday morning, I’ll be waiving my terrible towel in the Holy Land.

Hi! How are you? I have recently been reading your book “Live from Jordan.” I find it quite interesting. Actually my husband and I just recently returned from a trip to Jordan & Dubai. We loved it there, and the trip heightened our interest in the Middle East. We are planning to travel to Egypt (& Jordan again) later this year.

Thanks, Cynthia. Glad you are enjoying Live from Jordan.
Best,
Ben