Ryan Kushner, an Unofficial Ambassador from Pittsburgh to Palestine 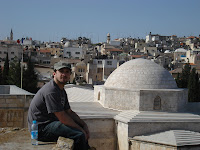 Jerusalem – Ryan Kushner, a professional film editor from Pittsburgh, brought some New York and Hollywood to Beit Sahour and Ramallah last week. Ryan, who is also my brother-in-law, came to visit us for a post-Thanksgiving break. His trip was full of the usual tourist highlights – Ryan walked the ramparts of Jerusalem’s Old City, hiked in the Mitzpe Ramon crater, and went for a run along the beach in Tel Aviv. He ate cheese fresh from the goat on a Jerusalem-area farm, floated in the Dead Sea, and even visited mini-Israel, where he “saw it all … small.”

What was different about Ryan’s trip, though, was that Ryan served as an Unofficial Ambassador, volunteering his time and expertise to two Palestinian non-governmental organizations, in Beit Sahour and also in Ramallah. In Beit Sahour, Ryan spent a few hours at the Palestinian Center for Rapprochement – an organization that does community service projects and also streams daily local news on their website. PCR just completed a three-week training course on how to develop and produce public service announcements. Ryan was able to follow up on the recent training and spoke about his own experience working in film and on PSAs. He also demonstrated how to color shots in Final Cut Pro, and answered specific questions about other editing techniques. 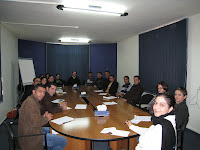 In Ramallah, Ryan visited the Palestinian office of DPK Consulting and met with a group of interns who will produce two PSAs about the recent successes in reform and modernization of the Palestinian justice sector. Ryan offered suggestions for organizing their video projects, spoke about key elements of pre-production planning, and screened examples of both a successful and non-successful PSA. Together, the group brainstormed ideas and direction for their projects. Perhaps most importantly, in both places, Ryan offered each group a continuing resource (himself) for questions and feedback.

While Ryan didn’t solve the Israeli-Palestinian conflict while he was here, the couple of days that he spent volunteering in the West Bank made a difference both for the people he worked with and for himself. The little things that Ryan and other Unofficial Ambassadors contribute on visits like this and on longer trips add up to real and positive change at the grassroots level. Not to sound cliché, but in the absence of major political solutions, those little changes are big.

On a professional level, Unofficial Ambassadors fill gaps in a substantive way. Ryan offered his Palestinian counterparts something tangible – the people he met now have a better idea of how to approach the challenges that they face in their work. On a personal level, Unofficial Ambassadors represent an America that wants to engage with other cultures. In many parts of the Middle East, locals make a distinction between the U.S. government and the American people. While most are critical of U.S. foreign policies, they admire the American people, who they view as representatives of a land of opportunity, freedoms, and innovation. To the Palestinians he met – people who are likely critical of U.S. foreign policy but who don’t have everyday contact with Americans – Ryan offered a first-hand example of the positives of the American people. The Palestinians who met Ryan went home and told their families that they met an American from a place called Pittsburgh who was nice and cool and who helped them with their work. In a part of the world where anti-American polls are off the charts, that’s a beginning.

It isn’t a one-way street, though. Ryan benefited from the experience, too. He had never been to the West Bank before, and now, whenever he hears about the Arab-Israeli conflict, the separation wall/barrier, or mention of Ramallah in the news, he will have a visual. He’ll know that the place is not a war zone (though it has been at times), but rather a city of hilly, twisting streets with office buildings, coffee shops, and restaurants. He’ll think of the real people he met, who work in the same field as him, face similar work-related problems, and may not be all that different on some of the other issues, too. 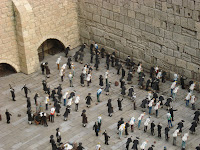 While I believe that Ryan enjoyed all the tourist activities -- especially mini-Israel where a petite elephant squirted water from its miniature tusk in Ryan’s general direction -- his Unofficial Ambassador moments in the West Bank made his trip special, for him but also for others. The more exposure that everyday people here and in other places around the Middle East have to Unofficial Ambassadors through organized volunteering programs or through the individual efforts of journalists, teachers, or in this case, film editors, the better off we all are back home.

Last year, instead of giving my family gifts for Hanukkah, I made contributions to organizations that do the work of Unofficial Ambassadors. This year, supporting the economy may be a heroic deed, but I imagine that these organizations are hurt by the economic meltdown, too. In addition to the worthy groups that I contributed to last year (listed below), I’ve added Peace Players International, an organization that I recently learned about that also works with children. If you can’t volunteer your time -- and you can do that through organizations like Cross Cultural Solutions -- consider spreading the holiday spirit and contributing to one of these groups:

Peace Players International brings together kids in conflict areas through basketball. I visited their project this past week in Jerusalem and watched 8-10 year-old Israeli and Palestinian girls learn about each other’s holidays and then play basketball games together for two hours.

No More Victims assists American communities in providing direct assistance and medical treatment to Iraqi children war victims. In the process, the organization creates personal linkages between the Iraqi children (as well as their families) and the community that has sponsored the treatment for the injured child. Their website has inspiring stories from Greenville (SC) to Pittsburgh to the Portlands.

Land Mines Blow and Adopt a Mine Field are two organizations that combat the heinous and continuing problem of landmines in post-conflict, developing countries. $3 to produce, $1000 to remove -- Landmines maim or kill 15,000 – 20,000 people a year, a third of them children.

Critical Exposure is an alternative for those looking to give to a good cause that benefits kids a little closer to home. Critical Exposure buys cameras for inner-city kids, trains them in documentary photography, leadership, and advocacy, and gives them a platform and the tools to raise awareness about the conditions in their public schools. $35 provides a student with a 35mm camera. Their website has some terrific student photos.