Black and Gold Cupcakes, a Breakfast of Champions

Tel Aviv - It turns out that American football and the Super Bowl are not the biggest draw at 1AM on a work night in Israel. We invited about 25 Americans, Israelis, and Palestinians to our Steeler party last night and the turnout was a little less than what we expected.

It didn’t bother me at all that some of our guests took turns napping in the back room. Ashley made delicious Steeler cupcakes with black and gold jimmies, the terrible towels were waiving all game, and we even shot off some fake Chinese firecrackers in the living room. I don’t think the neighbors minded at all. I’d already woken them up with my yelling.

Most importantly, we won. What a moment of exhausted satisfaction. By the time we made it to bed it was 6:15AM.

As I wrote to the Sports Guy in his Friday Chat (unpublished for some outrageous reason), “With two minutes left in the fourth quarter, down by four, I’ll take ‘Ben’ over Warner any day.” The guy is a winner – a totally clutch player. For the last two decades, the Steelers have won despite the play of their quarterback. This year, our defense was like something out of Greek mythology, but we were the best last night because of our quarterback. 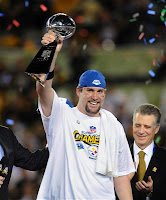 Put Ben Roethlisberger on that list of champions with Montana, Elway, and Brady. It is a list of legends, of multiple Super Bowl winning-quarterbacks, who shouldn’t be counted out until the clock hits zero. Now Roethlisberger, like Montana and Brady before him, has turned what seemed like inevitable victors to stunned losers under the brightest of lights and on the grandest stage. Like Elway, he has lifted a city, and in this case a nation, to a place where anything is possible. At the same time, he grabbed the state of Arizona and ripped the beating hearts of adoring fans straight from their chests. Their dreams of a victory parade, Rose Garden photo ops, and believing that their one shining moment had come, evaporated into the Tampa night with Santonio Holmes' Swann-like catch.

What an unbelievable game, what an extraordinary finish. Troy Polamalu put it best: "We're the first to win six [Super Bowls] and the way we've done it, with humility, is a great example to carry forward. It's a team that has really taken on the personality of its city. We're very blue-collar, and very hard working. And very nasty as well. This game was so amazing. You are seconds away from me crying in the locker room, and [the Cardinals] being out here. I can't believe it.''

He wouldn’t have been the only one crying, not by a long shot. To love Pittsburgh's teams is to remember red-eye mornings that followed the exploits of Larry Brown, Francisco Cabrera, David Volek, and Jason Goheen. But not this year. Our super season ended with the ultimate outcome. There is a lot to relish between now and the start of training camp this summer.

Yet, even with the championship won, it is sad to see the season end. I might get more sleep, but Sunday nights will not be the same. And I’ll miss those Espn.com Monday mornings these next six months…

Of course, the good news is that until baseball season starts and the Pirates roll into town, there is always room to hope for more. Pitt basketball is #3 in the country and Dejaun Blair had 22 rebounds against Notre Dame on Saturday. March Madness is right around the corner :)
Posted by Ben at 2:39 PM