As I watched Dante Taylor and Trey Woodall bring down the curtain on Pitt’s final Big East home game this past Sunday, I realized that some of my favorite childhood memories are linked to Big East basketball. My parents worked at Pitt for three decades, and I grew up on Pitt’s campus, going to games.

Big East giants from Patrick Ewing and Derrick Coleman to Allen Iverson and Ray Allen came to town and tried to escape with a victory. The best player I ever saw in person was Syracuse’s Billy Owens. I’ll never forget a play when he was trapped in the corner and somehow stepped around Darren Morningstar, took two dribbles, and almost tore the rim from the backboard “Send it in Jerome!” style. 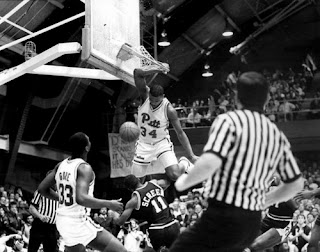 For Big East aficionados, the conference’s break-up is sad. I’m thrilled (and still surprised) that Pitt wasn’t the Connecticut left behind, but disappointed that the conference as we know it will cease to exist. Over the last 30 years, I’ve marveled at the speed, athleticism, and physicality that went into the battle to be the Beast of East. Every time I think of the 2003 Brandin Knight team breaking through at the Big East tourney, I smile.

Those Knight-led teams broke a trend and started a Golden Era of over-achievement. Pitt has had the best winning percentage in the Big East the last 12 years! That is an unbelievable fact for those of us who remember Paul Evans ordering players to carry cinder blocks around Fitzgerald Fieldhouse, Ralph Willard blaming his players for losses, and Ben Howland absconding into the UCLA night.

My favorite Fieldhouse moment was when Pitt beat then number 3 Oklahoma in 1989. Brian Shorter was a force inside. I’ve never seen another college basketball player catch the ball in the post and attack the hoop like Shorter. Rod Brookin was unconscious, hitting jumper after jumper from the corner. The old scoreboard, a square antique that hung above center court, flashed “OX OX OX” and “Hot Rod” with such 80s flair.

I loved that 1989 team. The pre-fab five of Shorter, Sean Miller, Bobby Martin, Jason Mathews, and Darelle Porter held so much potential, and we dreamed of championships. Like so many other Pitt teams, it just didn’t happen, though. They had a terrible coach. They missed free throws. They had no bench.

That was a year when my brother and I took turns going to the games with my Dad. We’d go to Pizza Hut before the game, eat two hand-tossed pizzas for $9.99 (we always had a coupon), and then cram into the Fieldhouse, a venue where Pitt could beat anyone. We’d cheer for Jerome Lane and Rod Brookin, but also Jerry McCullough and Orlando Antigua in the lean years. It is one of the times, as a middle schooler and then as a high schooler, that I felt unquestionably happy, sure that there was nowhere else I’d rather be. Standing the entire game, eating nachos a few minutes before the half (to beat the line), and watching Pitt slay giants on a school night – it was great.

It has been years since I lived in Pittsburgh, but my love for Pitt basketball has stayed the same. It isn’t always easy – this Golden Age has brought its own stomach punches. I’m twice as old as these guys now, but Scottie Reyonlds’ lay-up in 2009 felt worse than Barry Goheen’s 3-pointer in 1988. Nasir Robinson’s foul against Butler in the 2011 tourney still hurts. 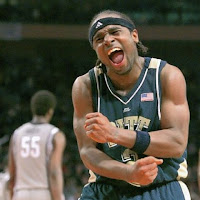 For every tearful March, though, there is the hopeful promise of January and February. Charles Smith is as close as we ever came to a Carmelo Anthony or Alonzo Mourning, but winter seems less gray when you have Jaron Brown’s grit, Sam Young’s head fake, and Chevy Troutman’s footwork; when Ricky Greer is flying to the rim, Pat Cavanaugh hustling to the floor, and Levance Fields stepping back and nailing a three.

These Big East basketball stories have been a part of Pittsburgh’s poetry, right next to the tales of Andy Van Slyke dives, Greg Lloyd sacks, and Carnell Lake hits. Champions never crowned, they played their hearts out, filled us with pride, and beat the best.