New York – Another year and another lump of coal for my family. This year, I continued my practice of giving my family’s holiday gifts to organizations that support Americans building people-to-people partnerships in the Muslim World in areas of human development such as education, health, and rights. In 2011, we’ll launch the America’s Unofficial Ambassadors initiative around this concept of service at Creative Learning, and as part of that initiative, I am writing a book about Americans volunteering and serving throughout the Muslim World. With this holiday season, I decided to donate to a couple of organizations working in Africa that I came across through my research and work:

Sudan Sunrise is an organization founded by Rev. Tom Pritchard of Kansas to build peaceful reconciliation between Muslims, Christians, and Animists in Southern Sudan and to achieve the dream of former NBA baller Manute Bol. My childhood memories of Manute Bol are of a 7’6, rail-thin basketball oddity who chucked the occasional three pointer. Bol was a greater giant off the court then on it; he devoted his life to building peace in his native home of Sudan. The problems of Sudan have received considerable attention over the last several years due to the genocide in Darfur. Before the genocide, though, more than two million Sudanese in the south were killed in civil war, many by Darfurians, actually. Bol dedicated himself to reconciliation between the different faiths of the people of Sudan, and his vision of 41 schools that educate children of all religions (together) is a revolutionary concept in a place that has been torn apart over the last couple of decades. Bol was also instrumental in saving the lives of some of Sudan’s Lost Boys, orphans forced from their homes during that country’s civil war. Manute Bol died this past June at the age of 47.

There is much to admire about Bol, a professional athlete who became a celebrity but who never forgot the problems of home. There is also much to admire about Tom Pritchard, a soft-spoken pastor from Kansas who has invested all of himself, personally and financially to achieving development and reconciliation in Sudan. A month ago, I met Tom Pritchard, John Zogby, Rudwan Daoud, James Mijak and other courageous leaders from the United States and Sudan who are dedicated to building these 41 schools and creating a new reality in Sudan. Donations to Sudan Sunrise literally translate to desks, books, blackboards, supplies, and a future for Sudan’s children. You can read about Manute Bol here and watch a video about his legacy in Sudan here. One thing – don’t be misled by the moving video from NBA TV. While I hope that NBA stars will line up to support Sudan Sunrise and the construction of these schools, it hasn’t happened yet and this is an initiative that needs your support.

Another excellent initiative that needs your support and that I learned about recently is the Village Bicycle Project. Village Bicycle Project collects used bicycles and ships them to Ghana and Sierra Leone. Since 1999, VBP has sent 50,000 bicycles to Africa and trained 10,000 people to ride them. In Ghana and Sierra Leone, with local partners, they sell the bicycles to motivated individuals, teach bicycle maintenance to create self-sufficiency, and sell tools and spare parts at discounted rates. You might find it surprising that they sell the bicycles, but giving them away for free only devalues their worth in the eyes of the communities and individuals they work with. What I really like most about the project is their emphasis on women and girls. Transportation between villages is a real challenge in many countries and bicycles are a form of mobility and empowerment for women, especially. For people who walk several hours a day, a bicycle can mean the difference in going to school and working at a job. 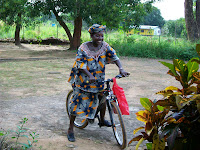 I found out about VBP and their work in Sierra Leone through Brittany Richardson, a San Francisco woman who left her job last year to spend seven months as a volunteer teaching young people to ride bicycles in Sierra Leone villages. Brittany had never traveled to Sierra Leone before and did not know the people she would meet and work with. She taught more than 250 girls to ride bicycles, including Kadiatu Brewah, a single mother of five children (her husband passed away four years ago) in her early 30s. Kadiatu (right) now rides her bicycle to and from her farm everyday. Other girls that Brittany taught to ride and care for their bicycles were able to cut their 7-hour commute to school dramatically.

The Sierra Leone program is relatively new for VBP, and they are collecting bicycles to send a container there in January of 2011. A $25 donation translates to a bicycle and independence for a young woman in Sierra Leone. You can also donate your old bicycle at participating stores across the United States from Boise to Pittsburgh to Kenosha. Take a look at VBP's website, their nationwide list of partners, and donate here. Donate soon though, to support the growth of their Sierra Leone program and the shipment of this next container.
Posted by Ben at 10:06 AM