A short piece I wrote for Habitat for Humanity's newsletter about the unofficial ambassadors I met in Tajikistan this past July. You can read here on Habitat's newsletter or below...


New York - In July, I spent a week in Tajikistan with Habitat for Humanity. Usually, a week with Habitat means laying brick or hanging drywall. If that week is with a Global Village build, it also means connecting with another culture and helping a family in a foreign land build their life. My experience with Habitat was a little different. 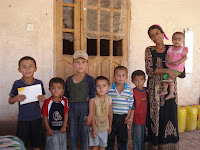 I direct the America’s Unofficial Ambassadors initiative at Creative Learning, a DC-based not-for-profit, and traveled to Tajikistan as an observer. America’s Unofficial Ambassadors is a new program that will encourage more Americans to volunteer throughout the Muslim World. By building people-to-people partnerships that support local leaders addressing human development challenges, private citizens can help to make a difference, not just on issues such as education and health, but also in the way we perceive each other. The AUA initiative will raise Americans’ awareness to the value of volunteering and then help people access the opportunity that is best for them, whether that is teaching English in a Moroccan village or building a home in Tajik town.

So, I visited Tajikistan to learn about Habitat’s program and see a Global Village “Women Build” team in action. I split my time between Nurek in the south and Khujand in the north. In Nurek, I met villagers who lived at the mercy of mudslides in brittle houses until they received Habitat loans. With Global Village volunteers at their sides, they built homes that are secure from the elements. Protection from the elements is so basic; we take it for granted in the United States. They don’t take it for granted in Nurek, though. Emomali, a smiling eight year-old boy, showed me photos from the build that the GV volunteers sent him. He remembered “Karla” and “Joe” who came from America to help his family. 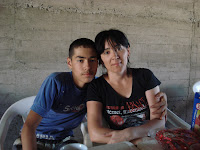 In Khujand, I watched six women from the United States, Slovakia, Belgium, and the UAE work alongside an earnest Tajik family. Mussabbe, the mother, is a gynecologist, and her husband is an engineer. In Tajikistan, they are a “low-income family” – Mussabbe makes $50 a month and her husband works in Russia, like many Tajik men, because it is difficult to find work at home. In a week of laying brick and mixing cement, the family and the “Women Build” team raised 75 percent of the house’s external walls. In September, the family will move into their new 5-room house and out of the 2-room house they share with ten family members.

The work of the family and volunteers and the connection they formed with each other were inspiring. After a tearful goodbye with the team on its last night, Mussabbe and her family went to the airport in the morning wee-hours to say thank you and goodbye, one more time. Such is the gratitude felt towards volunteers like Jean, a 62-year-old from Nebraska who traveled half-way around the world to be a part of creating a healthy life for a family whose mother’s ambition is simply for her son “to possess a good profession and not to go to Russia to work.”

My trip to Tajikistan reminded me that a home, whether it is in the United States, Tajikistan, or any other country, is fundamental to feeling secure and aspiring for something more. I’m looking forward to my next trip to Tajikistan, when I return not as an observer but as a Habitat volunteer with other unofficial ambassadors who seek to make a human difference.
Posted by Ben at 8:33 AM